Things are still buzzing along. For a few days, what with running from nannying to retail, retail to costume meetings, costume meetings to fittings, fittings to shows, I haven't had much chance to catch up on sleep. Today, though, I couldn't get into the theater until 4 anyway, and have never spent longer than three hours at the Outlet Goodwill (the limit to my endurance), so I came straight home from nannying and took a good long nap before spending 11 hours costuming today.

Blood Wedding is coming along nicely. A couple of days ago I wasn't sure how everything would get done. Then, with a few changes, yesterday I suddenly felt like we had a show, and everything else was minor. Today I realized again just how much construction and alterations I have left to do (one new skirt, a vest, multiple hemmings and moving of closures, and three coyote shawl-y things - as well as a wig fix) and it means tomorrow I'm going to go straight from nannying to the fabric store, and from thence to the theater where I will spend the rest of my day. Tomorrow is final dress.

I really need to iron everything, but that might just happen on friday before opening.

My other costuming gig will be going well shortly. I don't have much time to devote to it just yet. I need to start sending extras emails.

We're reading Anne of Green Gables in the mornings. Anne just jumped on Miss Barry in the spare room bed. Lots of hijinks will ensue tomorrow morning. If I don't sleep through my alarm like this morning. I rolled out of bed swearing 45 minutes after I was supposed to be there so everyone could run. They are so used to my being dependable (I've only overslept once before in nearly a year) that they'd left assuming I'd be there. They did call to make sure I was getting the girls up on time. It's nice to know they trust me. Too bad it happened on the morning when they shouldn't have.

Posted by Rachel LeAnn at 11:28 PM No comments:

You know you've been shopping too much when...

You're standing by a bin at the Goodwill Outlet, and hear a voice behind you talking. It's one of the managers, or perhaps security, speaking with a reporter with Channel 7. I tuned it back out until hearing the answer to the question I'm presuming was along the lines of, "Do you have many people that come in a lot." I tuned in because I heard, "Do you see that girl?" I lifted my head, and he stopped. I went back about my business of scouring for costumes for Blood Wedding. "Do you see that girl? She's here ALL the time."
Posted by Rachel LeAnn at 6:07 PM No comments:

So I have the opportunity to design some clothes and sell them at a local antique store. It might be a nice way to bring in some extra money, plus a chance to be creative in a public sort of way. Plus. Fun!

So over the holiday Erin was in town, who takes AMAZING pictures, and she took photos of a few things I've made over the years. I updated my portfolio, and now I'm ready for my meeting on Friday.

Here are some highlights:


My corset, covered in bleached muslin and hand embroidered with vines and flowers. A fluke left me with a fuschia drawstring, but I kind of like the contrast. 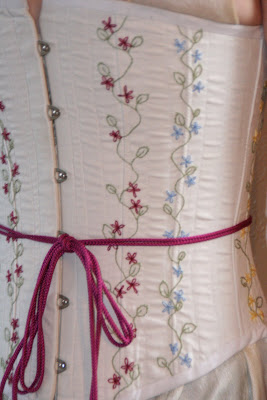 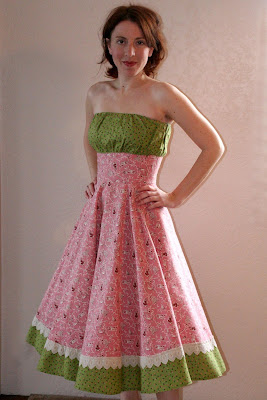 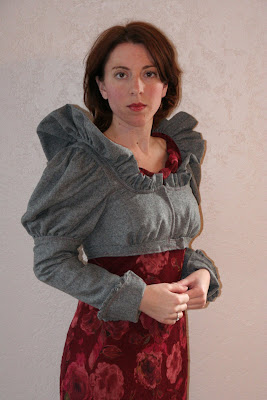 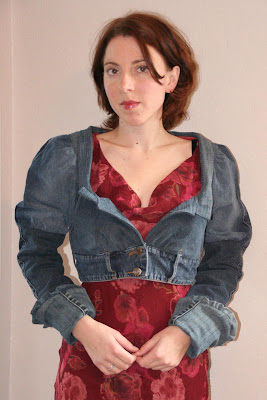 Posted by Rachel LeAnn at 11:15 AM No comments:

And I'm back to busy.

Thursday was my first day to run the show as Mama Bear. Also my first time to walk blocking. Also my day to be off book for that role. So, I stumbled through. I was told my character voice was very nice. Good. I didn't realize I was using one - I was so distracted by trying to remember what to say and where to stand. Pleasant surprise, that!

Tuesday I'm off book for Goldilocks and running at least one time through that day.

I'm costuming Blood Wedding right now, which opens on the 30th. I've run into a bit of holdup trying to find some of the big houses that will lend to us. I was told we had reciprocal lending agreements with local theaters, but it turned out to be based on contacts with each costume designer, not with the theater. Now, because of MLK, I won't be able to track costumes down again until tuesday. Hopefully this will all come together soon. Funny image from last night's soup-fest. My pot of Split Pea was simmering next to my roommate's rice, and her friend's hoomemade chili - right next to a pot of tea with a chemise in it.

I'm costuming a Clown Film next month, which I've been to some production meetings for, but am not really thinking about much until Blood Wedding is up and running. I've been gathering a few accessories here and there, but mostly I'm out of the game for now.

I'm still working a few shifts of retail - but mostly on call. I didn't get called in at all this week, which is worrisome, but not tragic, since Goldilocks is paying me these days. I've been told by my manager that once the college kids leave there will be more shifts, and they definately want me to stay on. Good to know.

Nannying we finished the Lord of the Rings trilogy, and have now started on Anne of Green Gables. Her comment? "Wow. She asks a lot of questions. When does she smash her slate over his head." I think she'll get more into it once we're out of the introductions phase. And Anne is about to yell at Rachel Lynde.

I'm off to costume. Goodwill-by-the-pound, here I come!
Posted by Rachel LeAnn at 12:05 PM No comments:

The stuff has hit the fan...again.

The company I worked for over Christmas has run into financial difficulties, the upshoot being that the actors are not going to be paid on time. Which, considering that I did the show because the pay would coincide with my next rent check, is a bit of a snag. Also, the shows cancelled due to weather we are not being paid for.

No worries, arrangements have been made so that I can stay ahead of everything again, but once again it's down to the wire, and I'm having trouble sleeping nights. It would be one thing if it was my lack of planning, but to plan and plan and plan and STILL have everything fall through is extremely frustrating. One can't find a job fast enough to stop the landslide if someone else drops the ball.

In the meantime, all I can do is stand still, stop spending, and hope all of the chips fall in the right order.

I know this is the way artistic lives tend do go - always scraping by, always on the verge of failure, but my type-A personality is struggling with it this week.
Posted by Rachel LeAnn at 3:46 PM No comments: