Thoughts on Wearing a Hijab and Intersectional Feminism 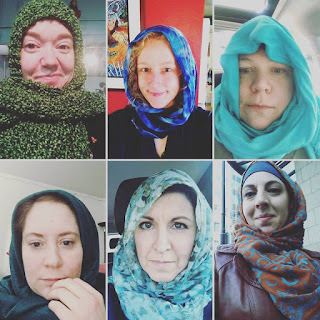 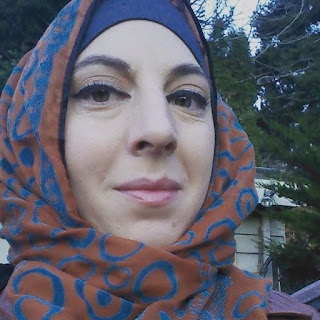 This has been an interesting time (and not in a good way). As someone who has always been passionate about making life changes based on new information - I can't learn something and not apply it - I find myself thrust into activism in a way I couldn't previously imagine. I think at this time in history, every person should be vocal about things that are important to them - on any side of the political spectrum. Decisions are being made based on base fear, and the lowest common denominator of society, and everyone needs to make their voice heard, regardless of conservative or progressive. There is enough protest for us all....

I went to my airport to protest on behalf of the legal immigrants/refugees caught in the gristmill when the "Immigrant Ban" went through, suddenly finding themselves detained or deported after having already been vetted. After that, there was a lot of discussion about "how we can help our Muslim neighbors" specifically those who "cover" (a term that encompasses anything from a simple scarf to a full burka). In my reading, I stumbled across "World Hijab Day." This is a program started by the Muslim world inviting non-muslims to participate in hijab wear for one day, to show support, solidarity, and walk a mile in a Hijabi Woman's Shoes. In my inter-sectional feminism readings (yes, this is a thing I read, now), I was struck by how often white women get all fired up in support of a cause, and quickly dash around to hold events - without stopping to see what is already being done by the group in question (The Pussy Hat March is a good example - it took a lot of time for the inexperienced women who were organizing the early march to pass the reigns off to several black women who had been organizing marches for years). In the post-Muslim Ban days, women in my circle were talking a lot about how to support Muslim women in our communities, to provide solidarity, to help deflect attention from their Hijabs, step in to protect them from harassment - all very important conversations.

So, having found World Hijab Day - I shared the link.

It was an intersectional disaster.

I was dismayed at how quickly (usually within seconds) WHD was dismissed as "cultural appropriation." "But they'll be offended." "They wouldn't want us to do that." "What if I offend someone." "I can't do that, it would be insulting to their culture." These knee-jerk responses came so quickly that the women clearly could not have even clicked on the link to read the heading to learn:

1. Muslims started the event.
2. Muslim women host the event yearly.
3. Muslim women who cover invited non-Muslim women to participate.
4. Muslim women host a Q&A every year to offer feedback about hijabs, why they wear them, are they forced to cover by their parents/husbands/religious leaders/culture, and how do they feel about other women wearing them

And I understood, at that moment, (after three different separate conversations - hand-wringing about how to show support, the event was mentioned, and liberal women shot down the idea, and rushed off to their own echo-chamber discussions) what those Black Lives Matter women meant when they said that liberal white women are often the most difficult to deal with in their causes. We rush in, we decide to be on-board now. And we take each cause over without stopping to listen to the voices of the actual people affected. We asked how to show support. Muslim Women told us how they would feel supported. We rejected their day, and rushed off to find a "better way to properly show support for our Muslim sisters who are too suppressed to know that they shouldn't feel good about either wearing a hijab themselves, or for asking us to wear one, too." It was sad.

Here's what I learned about myself from wearing a Hijab for a day.

1. I didn't feel Muslim at all that day. I *looked* very Jewish.
2. Bless Seattle, no one even batted an eyelash at me.
3. A headscarf doesn't change me on the inside. It's just a piece of fabric (granted, only one day).
4. I was very aware that I was conspicuous.
5. I had some great conversations at work about hijab wear and what I'd learned.
6. I was ASTONISHED at the liberal response.
7. I read that H&M was a great shop partly designed with cool fashions that are covered enough for Hijabi women to shop off the rack. I went into one. I found loads of stuff!
8. I discovered that I don't own anything in my wardrobe (outside of bathing suits and some formal wear) that I couldn't wear with a hijab.
9. I found my local Muslim shopping center right up the road from my house, and a very nice lady in a burka, and another really nice lady in a hijab, and the first lady's two grandsons, helped me choose my lovely hijab - as I wanted to shop from an actual Muslim business owner as well.
10. A headscarf doesn't change how my brain works, how I think, how I feel, but it does change how I feel about encountering strangers. Suddenly I knew I was very visible, and any person I passed *might* hassle me. This was particularly true if I was *trapped* anywhere - on busses, in elevators, etc.

....I have more thoughts, but have run out of time to type for today...