Life went from half-employed to full tilt in a matter of weeks.

I've been kind of cruising for about six months. While Funny Girl was running, I was too busy commuting to get a summer job, and worked on establishing my Etsy shop, instead. It was something I'd been wanting to do for quite some time. Alan's been well employed, and enjoying his day job, so it was time for me to get to take a breather.

I miss taking a breather.

Looking at the finances, with tax season approaching....health insurance to purchase...a root canal on the horizon...it became clear that my days of rest were over, and it was time to start putting out feelers for some summer waitressing. Costume Designing was coming off its Holiday hiatus as well, so things were generally looking up already....I sent out a few Craigslist replies, hoping that I'd be in the position to find a 'perfect' job for summer - either great pay, or good location, or stellar hours, or something....and then in January, I got an interview and was hired, and suddenly added 4 days of waitressing to my work week.

Don't get me wrong - it is all of the above: great location right down the street from my house, so no early-morning commute to downtown Seattle. Busy restaurant during the summer. Good pay overall when things pick up, and in the meantime - pay once per week, with the added bonus of tips being added to the paycheck - so taxed, and no ability to blow your cash the next day on makeup instead of being sensible and paying off credit cards with it. (PS - what little cash tips I do come home with is currently going towards makeup, which I've been out of - and having to dip into my stage makeup for basics while I waited. So, YAY! My sensitive skin issues already required me to wear makeup that wasn't from the grocery store - and now that I'm trying to limit the sheer volume of chemicals touching my skin, it's gotten even more expensive). The job is a great thing - but it's caused a jump in my productivity now that I'm limited to 3 working days for theater a week.

The Etsy shop is running well. I'm up to an average of a sale every 3 days, and it's bringing in "gas and groceries" money. Someday I hope I will be able to develop it into a mainline...

I put up two shows back to back this past week. The "easy one" - 6 costumes and a few accessories - wound up being a nightmare. The "difficult one" has actually been a lot of fun. I went to see the show last night, and there were a few more usage issues to fix - but overall the show is in good shape, looks beautiful, and the actors are wearing their clothes well. I knit myself a washcloth last night - during the show, with yarn pulled at random from my scrap bag - I'm calling it my Helen Keller washcloth.

Yesterday I had half of the day to "do nothing" so I painted my photo studio - IE - the wall on my porch that I photograph my items. The grey wood siding was a nice rustic background, but the rotting in places was getting hard to photograph around, so I mixed a grey to match the exterior paint on the house, and gave it a nice new non-shiny finish! I was so excited to get out and photograph a new set of washcloths this morning!

There are a few other gigs in the works, but I'm hesitant to take on more work, even for good money. This week has been a lot of long hours - which were easier to put in when I was starving, but now that I'm well fed, I just want to be at home puttering around and planting my winter garden. Which looks great, by the way! Look at all my little sprouting onions!!! 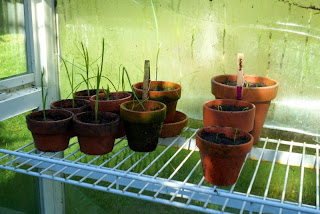 Posted by Rachel LeAnn at 9:36 AM No comments: