Hello blog world... It's me. I know. It's been a long time. I've missed this. The thing is....after five years of working non-stop trying to "make it" in the theater world here, I became kind of boring. My hobbies are at a standstill, since my job involves being creative on a daily basis. I've journalled sporadically at best. Quiet time is at a nil. And I'm married. Which is wonderful, but means that most of my "spare" energy and time is spent trying to date my husband...or at least, fall asleep at the same time for a change.

I had an epiphany around Christmas this year. I finally, FINALLY got to do a great show at a real live, professional, "pay your actors" theater with great people and sold out performances every night but a handful in an 87-performance run - something I've been working towards since I moved here (minus the children's theater work I do, which pays really well). I'm making enough money that I've begun re-evaluating what to keep and what to give up for next season costuming-wise, since I don't have to take every gig offered just to make ends meet. Getting the second alterations gig this year means that my portion of the bills are covered by hemming pants, and anything I choose to do beyond that is "discretionary."

But niggling around in the back of my mind was a sense that I needed something more than work. That should be obvious. Every women's magazine in the checkout line has that right on the cover. I even need something more than a wonderful husband - as much as I love my marriage, Alan has more to do in life the exist at my beck and call, whenever I have time to spend.

My 'Blessed Company', which has been chosen across many years, many different versions of my life, many different cities and states, and sometimes even countries, had fallen a bit by the wayside. This is natural, I think, when one is entering into a relationship and then into the early stages of a marriage. But I felt bereft of friends and support, and missed the letters from one set; the phone calls and texted photos from another. Finally, at Christmas, when I had a few months with a little bit of downtime, I set about reconnecting.

Then, by a miraculous happenstance, Alan and I took a vacation. On our way, we discovered that the Texas branch of the Company was going to be on the same vacation we were - on overlapping dates. We managed to connect at the fort in St. Augustine, and Alan met the 2nd branch of the Company. It was a wonderful time, and so wonderful to connect parts of my life to each other. Alan now understands why I love the Scobells so much, and they why I love Alan.

So, I'm taking steps this year to try to balance. I'm making an effort to extend invitations to people here. I'm going to Thai with a Stitcher friend of mine next Saturday. I've made a New Year's resolution to exercize 52 times this year. Alan and I took a much-needed vacation. I've told a few people "no, I don't have time to do that." And I'm trying to let myself stop working sometimes. And maybe, just maybe, I'll blog again.... 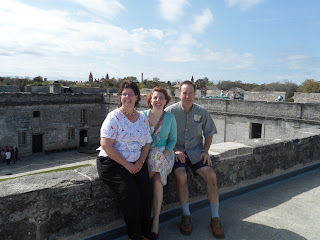 Posted by Rachel LeAnn at 11:30 PM No comments: