Lilli (Katherine) and Lois (Bianca) backstage at the Understudy Run of Kiss Me Kate. 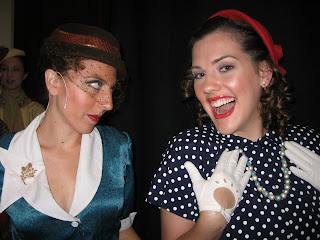 Posted by Rachel LeAnn at 12:13 PM No comments:

Email ThisBlogThis!Share to TwitterShare to FacebookShare to Pinterest
Seven left of the Sound of Music, Six left of Kiss Me Kate. When you enjoy working with people, twenty shows isn't nearly enough time to spend with them. I'm really not wanting Sound of Music to end.

One cast of kids, realizing they were on their second to last run, brought out a camera and ran around for hours backstage flashing the thing in our faces. Very annoying. I keep bringing mine, but never have time to snap pictures anyway.

I've checked out four new books from the library; another Madeleine L'Engle, the new Lois Lowry, At the Back of the North Wind by George McDonald, and The Enchanted Castle by E. Nesbit. I thought, when I checked the last one out, that the name seemed familiar. She must be the precurser to every author I love to read. Her writing (mid 19th to early 20th century) must have influenced P.L. Travers, C.S. Lewis, and J.K. Rowlings. (I wikipedia'd this morning, and found that Lewis does quote Nesbit as a big influence on Narnia - especially The Magician's Nephew.) I've been reading quite a bit of adult fiction, but several books I didn't finish. I began a book by Simone de Beauvoir, thinking I'd like her, but I grew tired of the hopelessness of the heroine, and started feeling her emotions rub off on me, so I put it aside. I used to count it a mark of honor to always finish a book I'd started, but, too many books to read, too little time to finish one I'm not liking.

More backstage conversations - this time, "Which Hogwarts house would you be in?" Apparantly there's a quiz out there somewhere. I'd hope for Griffindor, or Ravenclaw. Most others hoped for Griffindor, too. The Captain landed in Slytherin. I've taken the "Which Harry Potter character are you most like?" quiz. Surprise, surprise, I always end up Hermione. Even when I lie, and change my answers.

Three days off from shows for me, but I work Monday and Tuesday. I'm spending today doing as little as possible before another week of shows, and another double header on Saturday. My quilt is assembled, and I'll be quilting to Book 7 on CD today.
Posted by Rachel LeAnn at 10:55 AM No comments: