I finally did it!

On March 19th of last year (I know this, because that's the day I ordered "Zero Waste Home" from abebooks.com. And if you've never heard of that book site - you need to get on it. It's the best place to order books from a nationwide collection of independent booksellers. Support local! And get really cheap books! Win-Win!), I began a journey into trying to lessen my impact on the world around me. It was part of a continuing process to go local, go organic, and stop buying things that were made at the expense of other people.

Zoning out already because I'm coming across as a left-wing, libtard? (Why in the current era can't we disagree with a viewpoint without instantly dropping into name calling? What are we, 7?) Here are just a couple of images that changed how I shop.... 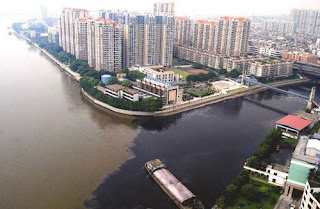 Here's what the Pearl River looks like after the dye from your denim gets dumped into it.... 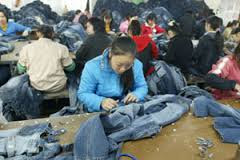 Here's a group of teenagers sewing your jeans

This kind of knowledge, once I started investigating, began altering my purchasing habits. Fair trade, shade grown coffee is expensive? But the alternative is the clear cutting of a rainforest, and the unnatural planting of coffee trees in full sun, requiring constant dousing with pesticides. Expensive coffee it is. The largest drain of water in California is the Dairy/Beef Industry? Alright, then my husband and I will share a cut of meat instead of buying two, and I'll purchase locally produced milk in glass bottles, which I use for cooking and lattes, but will drink water instead of milk the rest of the week. Birth control is making me fat and nauseated, (And it's starting to look like all of those hormones pouring into the local water supply is causing fish to spontaneously switch from male to female)...well, Fertility Awareness Method it is....no nasty hormones in my protesting body, and maybe I'm helping the environment a little, too.

So, since last March, I've been on a journey to be Zero Waste, as well. On reading the book, the main idea that stuck out for me was: You don't have to recycle stuff that you don't bring into your house in the first place.

So I began a process. Which sucked. It is SO difficult to be zero waste in a society that values the disposable. It is also difficult to find a store that won't treat you like a cuckoo bird for trying. But after about six months, I found two stores that will help me buy products in jars. I've found a bulk store that doesn't do tare weight, but I can take my bread bags in and purchase bulk that way. I found another store that will let me take in my bins that's biking distance. And I've tried to find DIY sites to help me make as many products as I can, without purchasing things in packaging.

And this week, I finally managed to go Zero Waste....in the shower.

I know it seems like a very small victory. But this was a long haul and a lot of trial and error! After almost a year of trying, here's where I ended up:

Shampoo: Replace with Baking Soda (hella cheap!)
Conditioner: Replaced with Apple Cider Vinegar and Water
Body Wash: Replaced with a Bar of Soap and a Loofah
Face Wash: DIY recipe, in a jar with a foaming pump
Shaving: Shave mug with shave soap and a bristle brush for lather. Permanent handle with Dollar Shave heads. (Which ARE disposable, but as a straight razor and a strop isn't really realistic in the shower, all of the eco sites recommend using razors with changeable heads)

OOH! And I forgot to include - I throw a pitcher of water in the shower while the water is warming up, and use that clear, clean, potable water to refill my Brita reservoir, my tea kettle, and my espresso machine - DOUBLE WIN!!


Hair washing was the biggest obstacle. The DIY recipes were too heavy and greasy for my thick but fine hair. I did pretty well with the natural shampoos and conditioners, but they still left a bottle apiece to recycle. I tried refilling the bottles with the health food store bulk products on two occasions, but again - the formulas were too greasy for my hair. Finally, I read another article on going "No-(sham)Poo" - and decided to try it....and voila! 5 days later I have soft, squeaky clean hair! And no more bottles!

If anyone out there is thinking about trying to get closer to zero-waste (And it's a process - let me tell you. You have to find ways to make it work for your lifestyle.) Some things will get replaced fairly easily, some things will just be too much of a hassle for you - and you can't beat yourself up if you aren't 100% right away. I've been doing this for almost a year, and I'd still say I'm around 80% personally, but only 60% for the collective house, since my husband will pick up prepackaged food as a default. Give yourself a break on those few things that you can't bear to lose. Even though I try to shop local, I still purchase avocados, oranges and bananas. I can make a lot of snack foods, but my husband and I couldn't bear to lose potato chips. We're on the wait list to join the chip bag terracycle program.

If this is something that interests you, start small and let yourself grow naturally into more. Better to be happily discovering new things gradually than trying to go 100% in a week, and then losing interest because it's overwhelming. Any steps we as humans can take towards being better stewards of our home, and the other people in it who literally make our lives possible, is a good step. And it is SUCH a rush discovering each new thing that you can whip up with ingredients around your house instead of running to the store each and every time!!!