Without meaning to, day 3 became a shopping day. On the way into town, I noticed a Brighton Outlet at the side of the road. Alan thought that we might be able to stop there sometime during our week. Yesterday the sun came out, and since my old pair of sunglasses (also Brighton) had died, and the Brighton Retail Store in El Paseo had discontinued my favorite pair, we decided that this would be the perfect day to start at the Outlets and work our way back into Palm Springs for lunch.

We started the day with Starbucks. Four people gave us coffee cards for Christmas and the wedding, so between them all we had around $80 to spend during this trip. Alan began the day with a quad shot venti mocha, and I had a vanilla bean frappaccino with an added espresso shot. Yum!

We drove to the outlets, realizing upon entering the parking lot that this MAY have been a mistake two days after Christmas. The lot was packed. Inside, though, it wasn't too bad. We found a Levis outlet and bought Alan two pairs of much-needed jeans ($15 per pair), then we worked our way around the complex searching for Brighton. We stopped in Gucci, Jimmy Choo, and Prada just for fun. After making our way to the opposite corner, where the Brighton sign appeared to be, there was no store in sight. We checked the mall map, and No Brighton! Disappointed, we went into Banana Republic for a top I loved last season (I have three of them, and they're all wearing out), and then into Esprit (a store I used to love, which we no longer have in the Northwest) where Alan found me a really cute peasant blouse for $9. We decided that we had shopped enough, and left for Palm Springs.

As we got on the highway, I looked back, and there were several shops on the South side of the mall that we hadn't seen from the inside. One of them was...hooray!....Brighton after all! I told Alan we could go back later, he insisted that we'd made it this far, so we ought to turn around. We took the next exit and found ourselves pulling off the highway towards a large statue of a Tyrannosaurus Rex. A huge sign proclaimed the existence of the "World's Largest Robotic Dinosaur Museum." Of COURSE we had to stop. We climbed up the Brontosaurus' butt into a gift shop and purchased tickets. Then we went into the museum. It was great. The dinosaurs were REALLY old. Some of them conveniently had wooden signs propped up on their stubby arms proclaiming what kind of Dinosaur they were. Since the museum was run by some seriously humor-free creationists, the dinosaurs were pictured alongside modern animals, with signs explaining why humans and dinosaurs had co-existed, and not realizing how funny it looked to have a little innocent white lamb laying quietly next to a T-Rex, or a not-to-scale frog sitting nearby while three velociraptors (one carrying his sign) hunted. It was great! We climbed all the way up the T-Rex and took pictures posing in his mouth. Finally, we made it back to another gift shop. I bought postcards. At the back was the best statue yet. A knight on a horse fought a rampaging Allosaurus! We're SO glad we missed Brighton! 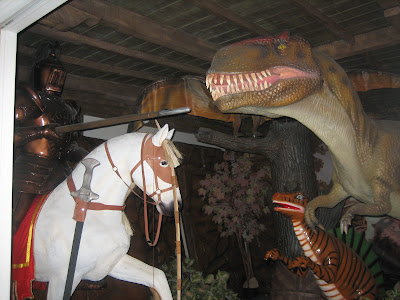 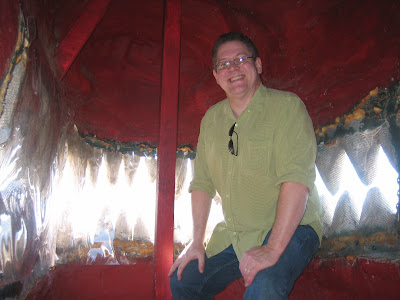 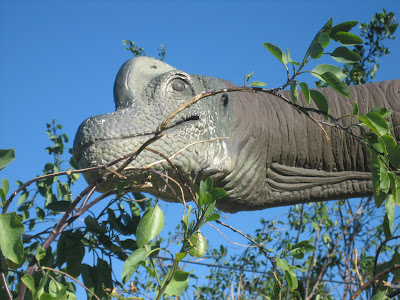 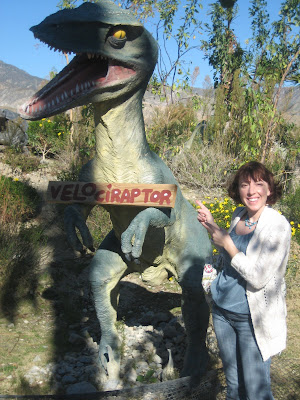 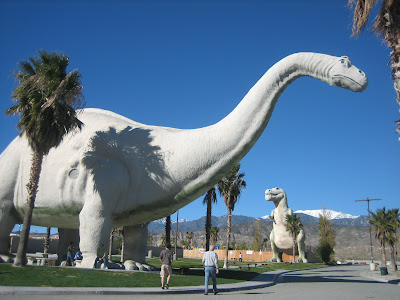 We did make it back to Brighton. I ran inside while Alan circled in the car. Inside was heaven. I could go on for ages, but I'll demure. I did find one of my favorite pairs of sunglasses in a discount bin for $9.99. YAY!

We headed into Palm Springs by way of Route 111. It became downtown Palm Springs. We beelined for a Mexican Restaurant that looked promising, and had a lovely lunch on the patio. I had the seafood burrito (lobster, shrimp, and scallops in a spicy lime sauce) and Alan the Mole Enchiladas. It was so good. I didn't mean to leave with a doggy bag, but I couldn't let it go to waste. We wandered up on side of the street and headed back down the other. Alan got his picture taken with Sunny Bono. 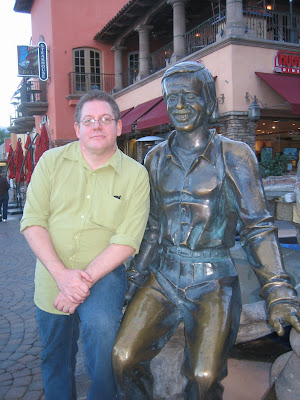 At sunset we drove the rest of Route 111 to La Quinta, California, to find Clint Eastwood's restaurant, "The Hogs Breath Inn." I had one of their specialty rum spritzers, Alan the Hog's Breath Ale. We ordered happy hour Calamari - which were excellent! We've noticed an overabundance of excellent places to eat in this town. Each meal we take is better than the last. There's not much shopping, but plenty of golf here. Great theater at one performance center in the middle of the valley. We decided NOT to see the ancient dancing showgirls (agest 55-81!), even though it was recommended to us.

After a few drug store and grocery stopoffs, we headed back to the house to relax, put our feet up, and watch tv until the wee sma's. It was a lovely, if tiring day.

Posted by Rachel LeAnn at 8:27 AM No comments: