I have almost literally been sleeping around the clock since 1 o'clock on Wednesday. This miserable cold with achies I've been fighting off long enough to do eight performances of Goldilocks finally hit with a vengance. I'm happily off cough and cold meds and letting it run its course. (I hate doping up for illnesses. If this one was any indication, taking all the medicine in the world for four days didn't make it any better, it just held off symptoms for a few hours at a time until I could crash)

Goldilocks went really well! I played Mamma Bear all weekend, and then did my two performances as Goldie on Wednesday. I finally feel like I've got the hang of acting for this company. For Cinderella I only went on once, and everything was a blur. For Pinocchio, my character had very little interaction outside the fourth wall, so it was very fun, but felt odd. Both Mamma and Goldie carry on lengthy conversational monologues and songs, and it finally felt right. Here's a picture from backstage. 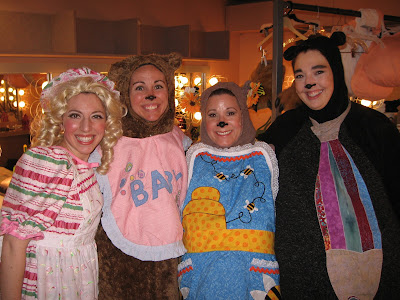 My costume had a big skirt and pinafore, and I amused myself backstage by twirling. My favorite qualifier for a dress as a child - did it have a twirly skirt. It was fun to regress for a few minutes.

Now I start costuming a film. I'm supposed to have three clown costumes finished for a preliminary photo shoot on Wednesday. Whether I get out today will depend on how I feel later, and if the rain stops. Not likely in Seattle - but I'm not feeling an intense desire to go out and get wet.

Auditions season is starting in town. My first single audition is Sunday, and mass audition is in the 16-18th. I decided to sing after all, even though my original plan was just to do monologues. I was too busy this past month to work up a second monologue. I hate learning monologues. They are so artificial, and almost impossible for me to pick out of context. I always watch in amazement as someone delivers a lovely comedic one on the spot - I struggle and struggle, and never do well. I worked with a friend on my new monologue and it wound up nicely after an hour, but in my audition the first go around was stiff - and once she "put me onstage" gave me an imaginary actor to play off, and some stage direction, it was lovely. They seem to frown on doing too many monologues from shows you've been in, but my best monologue at that audition was my little scene from Pinocchio, because I've done it so often. Silly monologues - maybe I should take a class someday.

Well, I think I'll go make myself something hot to drink, and retire to the couch to read more Lewis. I finished the Abolition of Man yesterday, and I'm on to the Problem of Pain. Seriously.

Posted by Rachel LeAnn at 8:30 AM No comments: