MLK- In His Own Words 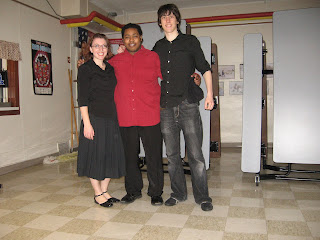 Martin Luther King - In His Own Words Cast.

This is Me, Charles, and Andy, the touring team of three that went round to schools in the Puget sound during January, doing a 30 minute play about Martin Luther King's Life. It was a lot of fun, and as driver, I got to pick the music on the long car trips. Mostly, since it was very early, they slept. We always were surprised by the kids' questions at the end. Almost every time we got a kid ask "where was he shot?" followed by "no, where on his body?" when we answered with the locale. Then "what kind of bullet..." etc. We did get some good questions too, like, "will segregation ever come back again?" To which a teacher replied by asking the school, "I don't know -- will you ever let it come back again?"

The only part of the show I didn't like was my eyes giving out again, and having to wear my glasses. But then I found out that having an actress in front of the kids wearing glasses, made some kids feel better about having to wear them themselves. I grew reconciled after that. Well, almost.

Posted by Rachel LeAnn at 8:23 PM No comments: