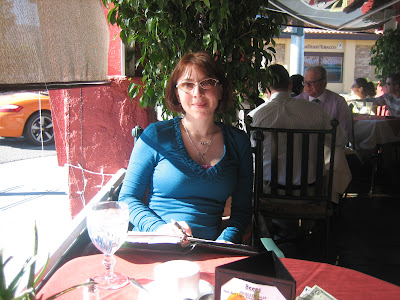 Today was was restaurant heavy. We woke up rather early (for us) and drove back to El Paseo to eat brunch at a lovely French Bistro. I knew I was in heaven when I walked in an the waitstaff were all speaking French. I had a really real Croque Monsieur, and Alan had the ham and cheese crepes. It was the perfect beginning to the day.

Next we popped down the road a bit and went to Boomers to play mini-golf. I was doing very well, coming out ahead after the first nine holes. But an unfortunate 6-stroke hole meant Alan won by four points. And now won't stop gloating, since that puts him ahead 2-1 on our running mini-golf talley. I interjected that the previous games have been on 9-hole courses, so since I was ahead in the first nine, and he won the back nine, it's technically 2-2. He's not buying. There were lovely little houses all over the course to play through or around, and we ran about taking pictures with all of them. (We also spent a really long wait in line to buy tickets checking out the ENOURMOUS rock on the finger of the woman in front of us; and wondering what her husband does for a living.) 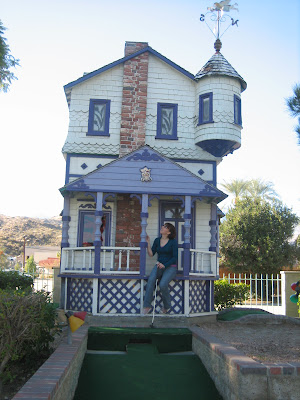 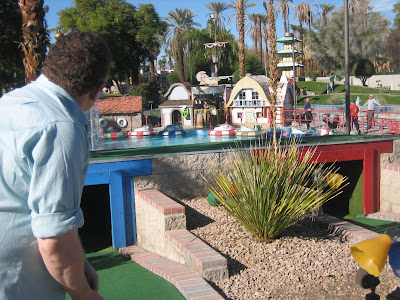 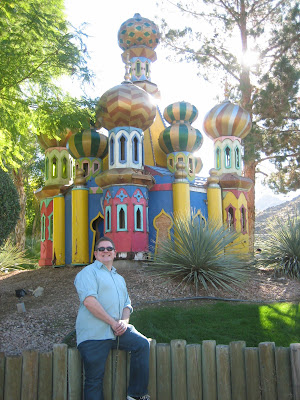 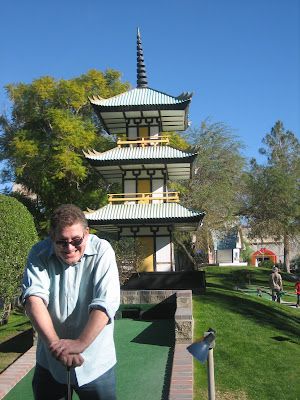 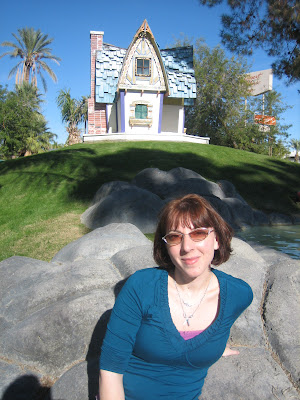 That morning, on our way to brunch, we stopped by Grandma's to check in, and she recommended that we take the tram tour while the weather was still nice. The tram is an 80-person lift that goes up the side of the mountains near Palm Springs, and rotates, showing a view of the valley. After mini-golf, a quick trip to the store and some frozen yogurt, we headed west of Palm Springs. (On the way we stopped by a local resale shop and found two Tommy Bahama shirts for Alan.)

We wound our way up the side of the foothills to the named parking lots. We wanted to park in the grey weasil lot, but ended up in the hawk lot. We waited for the bus to the lobby. Upon entering, a driver not chosen for his people skills informed us casually that the earliest we'd be getting on a tram would be 4:30. It was 2:50. We hung in there, and made it to the lobby, walked in, saw the line, and decided that if we were going to wait for two hours in that kind of crowd, there had better be a pirate or Indiana Jones at the end of it. We walked back down the hill and left.

We stopped into a little Antique Mall - the first we've seen in Palm Springs that wasn't so ritsy that we were afraid to go in, and enjoyed our usual routine of bopping around. I bought a stack of outdated decor magazines for some hottub side reading.

With time to kill, and options running out in Palm Springs, we decided to Happy Hour Hop our way back home. Alan had a disastrous "British Pub" experience the day before. (When you walk in, and the bartender had never heard of Smithwicks - and when asked what kind of lagers they have and replies 'Bud' - you might consider yourself clued in) So, for him, we stopped into a "Tilted Kilt" - a Scottish Themed Pub. What we didn't know was - Tilted Kilt is the equivalent of a Scottish Themed Hooters. We walked into a charming pub with stained glass windows of busty girls in mini-kilt bikinis. When our eyes adjusted to the gloom, I realized that both our hostess and bartender were in the same outfit. We did stay, when they had Smithwicks, Harp and Guiness, and had a happy hour black-and-tan and some onion rings. There were some really great posters on the walls and ceiling, and authentic scottish highland dress prints in the bathrooms. I took pictures of all the ones in the girls side. I couldn't muster the guts to walk into the men's bathroom for the others.

Next we drove back to El Paseo for the Tommy Bahama happy hour. THAT one was great. Alan had a mojito, and they made a Strawberry Daquiri for me. All the waitstaff were wearing identical shirts (we were wondering if they let the employees wear Tommy Bahama, or if they mass order knockoffs). The atmosphere was great, the staff pleasant, and we saw some really nice entrees go by. We popped through the Tommy Bahama Store and Anthropologie on our way out.

Grandma and Ken had recommended a place called Jackalope for appetisers, so our last stop was there. It was a huge restaurant that for some unknown reason had giant pig statues everywhere. (We thought they'd fit in better at the Hog's Breath Inn) There was one jackalope behind the bar. I had their corn and shrimp chowder and Alan tried their Potato Skins and the Jackalope Ale. They were advertising for a New Years Menu, so we may be back again.

After all the excitement, we went back home, heated up the hot tub, and had some wine and champagne and another romantic night. And watched the new "What Not To Wear." Poor Alan is overwhelmed sometimes by how many lucid fashion comments he's now capable of dolling out - after several years of forced Project Runway viewing. When the words - "She just needs a belt to accent her figure" came out - he whimpered a little.

Tomorrow, off to Warner Brothers!

Posted by Rachel LeAnn at 8:27 AM No comments: