Making Yogurt - or, gosh - another thing that's ridiculously simple NOT to buy!

I do as well, but I'm very basic. I like vanilla yogurt. Period. I like it with granola. I've tried other flavors, and liked a few, but I'm turned off by slimy gooey fruit-on-the-bottom cropping up in my perfectly smooth, yummy breakfast.

My boy likes all sorts of flavors, and I've been pleased at having something vaguely healthy that he'll eat. Normally I'm trying to hide vegetables underneath his meat. (To be fair, if I put vegetables on his plate, he will eat them all...leading to one unfortunate Brussel Sprout vs. Small, Intimate Theater episode that will go down in our marital history)

A lot of blogs and friends have said that making yogurt is so easy that one MUST try it at home. I didn't really have much of an opinion on yogurt - zero-waste wise. My toothbrushes are made from recycled yogurt cups, so it felt like a wash. But I found a really cool yogurt maker at Value Village, and had my husband give it to me for Christmas. 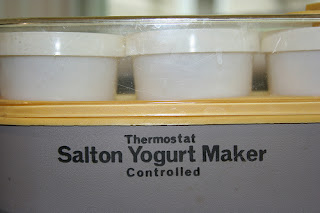 It turns out that mine is a 1974 Salton Yogurt Maker. What I like best about it, is it comes with 5 glass yogurt cups, with plastic lids (probably not BPA free, but they aren't being particularly warmed, so I'm not too concerned) - that are about the same size as a standard store-bought yogurt cup.

The approach is actually fairly simple.

4 C. Whole Milk (You can use 2% or Skim, but they won't make as thick a yogurt)
3 Tbsp Plain Yogurt (As a starter - after the first batch you can use your own yogurt)

Bring milk to 180 Degrees (just boiling), immediately cool to 120 degrees. If a film forms, remove. Add 1 cup of warm milk to Yogurt. Blend lightly. Add mixture to remaining warm milk. Pour equally into yogurt cups (or glass jars). Put in yogurt maker (Or surround jars with warm water - keep refreshing water every hour or so). Let sit undisturbed for 5-10 hours. The longer you leave them, the tangier the yogurt will be. Strain out the whey for Greek Yogurt. 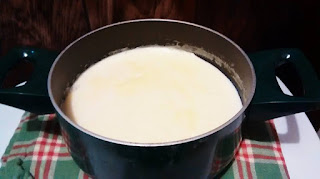 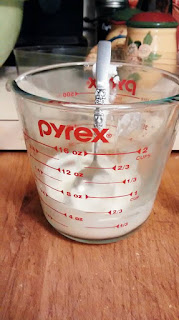 I started mine at an odd hour, and had to get up at 2am to take my yogurt out of the warmer. I put them straight into the fridge, and this morning awoke to lovely, fully "gelled" plain yogurt.

Yesterday, I ate the remaining single serve tub of Greek Yogurt I'd purchased for my starter. I wanted to gauge what type of sweetener tasted good to me. So I did half with honey, and ate the other half with a little brown sugar sprinkled in. Both were yummy - I liked the flavor of the brown sugar more, but it was a touch grainy.

This morning, I looked up some various recipes, and discovered some things.

Basically, yogurt is a tricky little beast, and getting too tricksy with it can make very runny yogurt. Lots of women then were sharing tricks of adding gelatin and pudding powder, or kool aid mix, or lemonade powder - basically anything with some gelling agent to add flavor without watering the yogurt down. But then, for me, what is the point of going to all the effort of making your own, only to add a whole ton of artificial flavors, fillers, gelatin, etc.

But one lady had a really good idea. Add jam. It will add a little sweetener, a gelling agent, and you can mix in some whole fruit (defrosted) to add some heft.

So I mixed one Tbsp of jam with some tiny bits of chopped frozen fruit, nuked it for 30 seconds to warm the fruit a bit, allowed to cool, and spooned it onto the top of the yogurt. My boy can mix it when he eats it, it looks really pretty, and if he needs a little more sweetness than the jam offers, he can always add a bit more honey or sugar.

So, here is the final product! 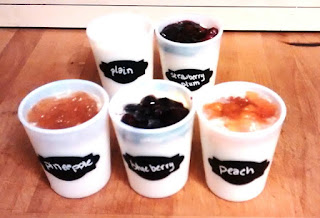 Posted by Rachel LeAnn at 9:03 AM No comments: