Well everyone, rehearsal was delayed today due to snow, so I have a moment or two!

Day 8 was our last morning in Palm Springs. We woke up early (for us) and tidied up, then dropped by Grandma and Ken's place to give them the keys and garage door opener. We had a lovely time!

We stopped by the Brighton Outlet one more time on our way out of town. I bought a lovey pendant necklace I'd loved, which was marked down to less than $10. Alan won brownie points when he found the same necklace marked down lower in another section of the store. YAY!

Our goal for the day was to hit several of the movie filming sites that Alan had researched, beginning the with Vasquez Rocks, where Kirk fought the Gorn, and more than 500 films have shot. The mapquest directions sent us out and around the back side of the mountain range instead of through the city. Since the Rose Parade and Bowl were on in Pasadena, we thought skipping L.A. is a great idea.

Three hours of driving through the absolute middle of nowhere later, we were wishing we'd risked the town way. Not only were we on a two lane highway where even the scrub brush was giving up the will to live, but traffic leaving Pasadena on highway 2 backed up traffic on the one left turn off my highway. We crawled through the desert for several miles trying to bypass.

Eventually we stopped in Peachtree (population 500) for gas and a restroom. The guy with one eye standing next to the man with no teeth told us that the "bathrooms is broke. You might try the likker store." We passed. I turned to Alan, who was passed out in the passenger seat with a migraine, and told him that these had better be pretty damn cool rocks.

Finally, just as we were worrying about losing the light, we pulled into the Vasquez Rocks. They were cool. Not three and a half hours of driving cool, but cool. After all that driving, it took us 20 minutes to get back into L.A. Stupid Mapquest. 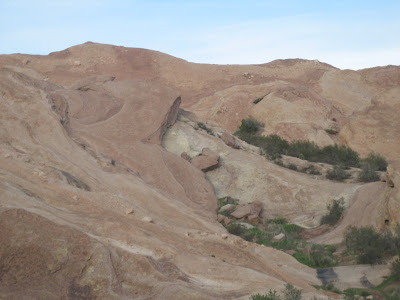 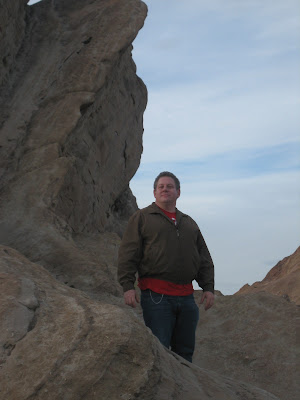 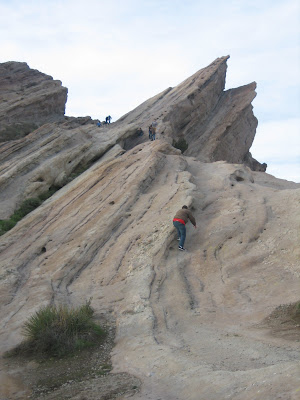 Next we went into Hollywood, but didn't stop, then took the longest possible way to the Pacific Coast Highway to go down to Long Beach. There, we found the bar they filmed "True Blood" - Alan's favorite Vampire drama. We chatted with the bartender about the filming and local area attractions. If we'd had more time, we would have stopped at the section of Long Beach with Vintage Clothing Stores and Restaurants. However, it was late, and we needed to find our hotel in Annaheim. 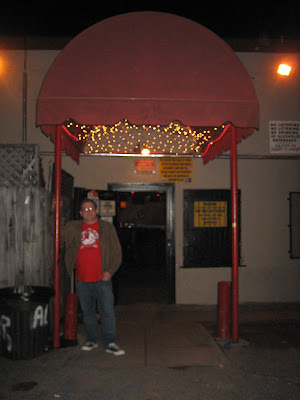 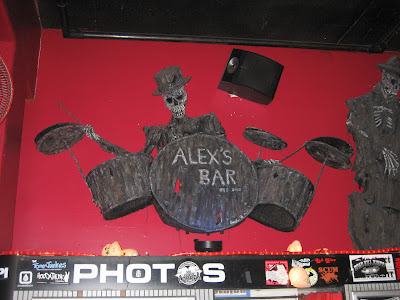 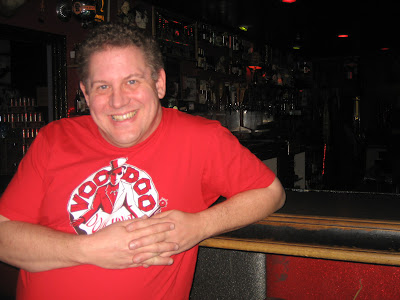 We stopped at a Starbucks to use our new laptop and find a hotel. Then we drove to Annaheim. After much driving around (Disney Way cuts off most of the streets around Disneyland, leaving us circling the park trying to find our street again), we checked in. Then we went to Dennys for an 11pm breakfast, then went to sleep, dreaming of Disneyland!

Posted by Rachel LeAnn at 9:06 AM No comments: