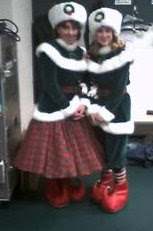 Yesterday was just chock-full of the Christmas spirit. First thing in the morning I woke up and took the bus downtown to once again become the Toy Block in the Macy's Children's Musical. We had a great crowd full of kids who yelled out the answers to the riddle, helped us think where the clock key was, and sang along to all the Christmas songs. Even the tech problems from the previous show got fixed.

The Toy Soldier, Santa and I worked on finding new and improved 'block' puns. So far we've come up with Blockhead, New Kids On The, and Block Party.

After an hour nap, I got up and transformed into the basics of a Christmas Elf for the Mannheim Steamrollers Concert. I ran to Goodwill on my way out of town to pick up some shorts and a t-shirt, and after a long wait in line counting down the minutes until I would officially be late, the guy three in front of my came back to dispute a double charge of a $.99 item. Brother! I interrupted (ack!) the cashier as he and she counted and recounted the items in his bag and asked to please have my two items rung up before they took care of his problem as I was very late. The cashier gave me the dirtiest look imaginable, and did it for me. (It was amazing how the lines that had not existed when I walked into the place were four deep at every cashier when I needed to go now. And the couple in front of me, even though they were obviously together paid separately, and one of their cards didn't work, so then they had to pay cash....this kind of thing never happens when you have all the time in the world!)

This gig was very much like what I imagine working for Disneyland would be like. We all arrived in the dressing room and began the robing process. Everywhere there were half snowmen and headless gingerbread men having ice packs strapped to their back and chest. The toy soldiers walked around in their suspenders and had red circles painted on their cheeks. Finally the elves were allowed to robe up, and have cheeks and noses painted bright red, and glitter sprinkled liberally. Petticoated and bell-topped shoed, we went up to the lobby to hug children, wish everyone Merry Christmas, wave, and have our photos taken. Repeat at intermission. Then after that we de-elfed and got to watch the last few songs (and several encores) of the Mannheim Steamrollers Concert.

I have decided that perhaps working as a character at Disneyland would be more fun than I thought. It was pretty amazing watching the looks on little faces as they tore over to hug the gingerbread man. (And I will never look at them the same way again - knowing my dainty gingerbread woman was a trucker underneath)

Posted by Rachel LeAnn at 6:54 AM No comments: