Why the refugee crisis IS actually our responsibility... Part 1: Food Waste 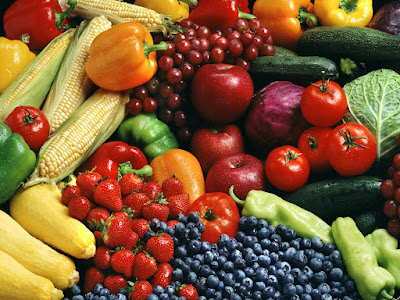 Like everyone else these days, I've been watching a lot of news, and reading quite a bit more of political articles than usual (I prefer to focus on people, rather than politics - but that's a luxury/privilege that isn't available anymore).

One thing that has struck me, as I listen to the pros and cons of things around me, is how much the refugee/immigration issue is spoken of in terms of distance. Those in favor feel that everyone coming in should be empathized with, and given the chance at a better life than they had in their own homes. Those opposed feel that their presence is too much of a strain on a taxed economy and services, and we should focus on our own people first. There are lots of opinions.

One opinion I'm not hearing from either side, is how we are responsible for the refugees in the world, not for moral/charitable/fellow man/ethical reasons, but actually responsible.

Our lifestyles directly contribute to most of the suffering of other people in the world.

Let's take the way we buy food. Once upon a time, even city people were seasonal food buyers. The super rich could grow summer fruits in a greenhouse, and sometimes tropical fruits could be shipped to temperate climates, but the vast majority of people still bought food as it was available from the farms, and canned/tinned foods when fresh weren't available. But airplanes suddenly made it possible for food grown on the opposite hemisphere to be shipped to us. And food stopped being seasonal. We stopped thinking of, say, strawberries as that thing we can only get in mid-may to early-july, and now we can eat strawberries any time. In convenient plastic shells, shipped to us from South America in January. So, what's the problem with that?

There are many problems. Firstly, it takes a LOT of gas to ship fruit quickly across the planet (this is what that "carbon footprint" thing means - how much fossil fuel is burned to get you a product). Secondly, it tastes pretty crappy, as the fruit has to be picked slightly unripe, in the hope that it won't spoil before it gets to you. Thirdly, supermarket buyers have trained us to only like perfect produce. If it's a little bumpy, or not quite the right color, or without the blush, they will throw it out before it even has a chance to be sold - perfectly good food is thrown out in stores by the TON every single day. Some stores, not wanting people to go dumpster diving for food, will go so far as to pour bleach over the thrown-out produce, to keep people from trying to eat it (this is illegal in europe). Lastly, once we get the food home, we still can't be bothered to eat it all, and almost half of our food goes bad and gets thrown away anyway.

So how does this look from the side of the country GROWING us our food? American money has a lot of buying power. Much more than most of the countries who are growing our food, building our furniture, sewing our clothes. A farmer growing strawberries in South America, can probably make more selling their strawberries to an American corporation than they could selling to their own markets. So, now the people in their own country can't afford to buy the produce grown there, because the farmer gets a better rate shipping the food away. We like to think that we are "giving our money to foreign growers to help them have a better life" but in reality, we are causing the global food shortages. There is, at this point in time, plenty of food to go around....but we in the US, are taking it all. And our money gives us the power to do so.

Now lets circle back around. Here we are, in the US, buying up all of the things we don't feel like waiting to ripen in our own farms....we've bought them away from other countries, we've burned a whole lot of gas to get them here in refrigerated containers that burn even MORE fuel....and TONS of it is being thrown out by our grocery stores, and TONS more of it is being thrown out by ourselves because we purchase more food than we can eat before it goes bad. (And our own poor aren't permitted to benefit from the surplus either)

And people around the world continue to starve for want of the food that we've taken from them, and can't be bothered to eat.

Have you read The Hunger Games? There is a scene when the main characters arrive from the poverty-stricken outskirts to the Capitol city. They attend a party, where there is more food than they've ever seen in their lives....with variety beyond their imagination...and the people at the party keep drinking cordial and disappearing to the restrooms. They discover that, in order to keep eating, the people of the city gorge themselves, then vomit, so that they can eat more.

We are the Capitol.

So what is the solution? It's really very very simple...(at least from a personal consumer standpoint)....If we, as consumers, change our buying habits, the stores will fall all over themselves to give us what we want. (If you shop at a store with a customer loyalty card - you're even more powerful - they're tracking your buying habits to see what else they can sell you) Here's some ways to shop better for yourself and the planet, and influence what your stores are selling you:

1. Shop Local/Buy American (see, I put it in both the liberal and conservative terms). All produce has a location sticker. Most stores will label the local produce as well. Make an effort to buy the closest produce to you, at times when it's fresh. Root vegetables/apples are a good exception - they store pretty well year round.

2. Buy loose produce. Skip the stuff that comes in a plastic bag, or a clamshell, and go straight for the loose carrots. They taste the same, but there's less waste (carbon footprint again - the packaging adds to the fossil fuels going into that product)

3. Choose your exceptions carefully. Even the eco-books recommend a little wiggle room. For me, it's coffee, chocolate, bananas, and avocados. Those will never be local foods, but since I make an effort to buy from farmers markets year round, those minor exceptions are a carefully considered treat. And when I buy them, I buy organic/nonGMO/Fair trade/rainforest alliance certified, because those labels mean that forests weren't cut down, the farmers were paid well, and my foods weren't covered in pesticides to grow them.

4. Buy bulk wherever possible. This is the nummiest little secret in the grocery stores. Most of the food in those bulk bins is organic. It isn't labelled as such. But if you look at the tiny print, most of the bags they're emptying into bins are from organic brands. If you walk right around the corner into the "eco-section" the same flour will cost you dollars more per pound, but in bulk, it's cheaper than the non-organic counterpart....because they didn't have to cover the cost of packaging into their product. "Convenience foods" are the biggest consumer rip-off - costing the consumer hugely, but yet, we're trained to think that organic foods are too expensive for the average consumer...and yet, organic foods are right under our noses, quietly, and without fanfare....it's better food for you, and grown under better conditions for the farmers.

I used to waste food. I never quite managed to get through that last bite on my plate. I was mortified on tour when a homestay chewed me out for leaving lima beans (I don't like them - and she dished out our servings). It was horrible having her serve me for the rest of my stay spoonful by spoonful, because "we don't waste food in this house." But, 10 years later, I recognize that my food waste is taking food out of someone else's mouth. If I only eat half of a portion at a restaurant, I take the rest away for leftovers. I try to buy only a few days food at a time, so that I don't have loads of produce I've forgotten about going bad.

I'm not the type of person who can "un-know" things. I don't want to become militant, either, in policing other people's shopping/eating habits (though it *does* hurt me, just a bit, to see carts full of food in individual vacuum sealed pouches) but I will manage my own food traffic as stringently as I can. I will use up what I can, and manage my waste, and try very hard not to add to the sufferings of the world by consuming more than my fair share. 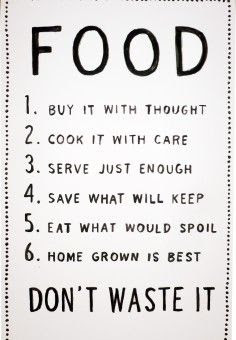